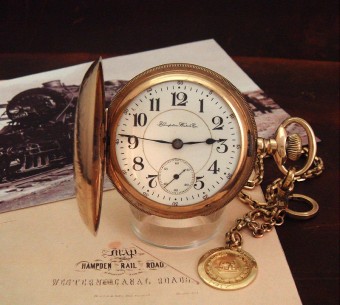 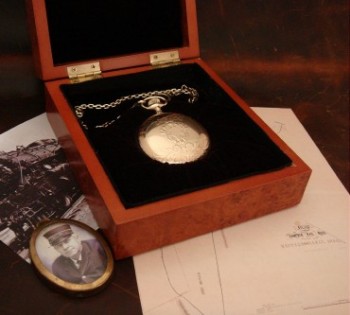 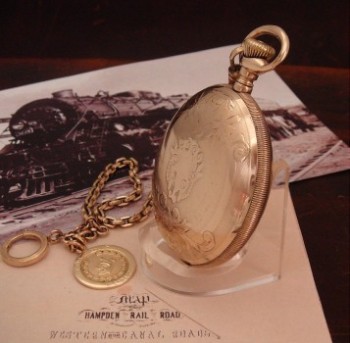 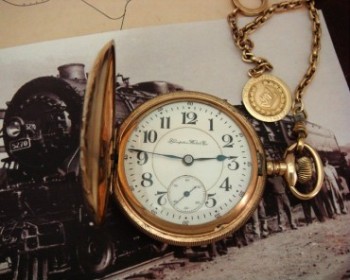 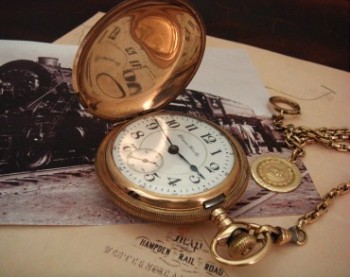 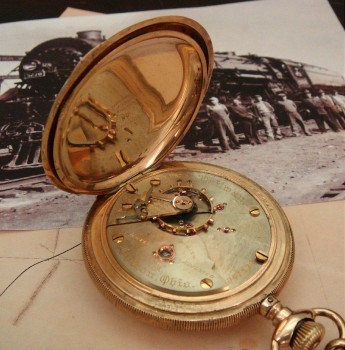 First there was Don. J. Mozart who, in the Civil War era, produced his horologically significant three-wheel watch. Then there was the prolific New York Watch Company and finally, Hampden Watch Company of Canton, Ohio. By the late 19th century Hampden was competing quite effectively against the "Big Four": Elgin, Waltham, Illinois and Hamilton. Creators of the first 23 jewel pocketwatch — designed specifically for railroad service — Hampden produced excellent timepieces that were not inexpensive. It might have been this attention to detail that was their undoing: The "Big Four" saw the success of the 23 jewel watch, borrowed the idea, and in 1925, put Hampden out of business. Dueber-Hampden Watch Company, known for their obsessive attention to detail, produced watches that were exciting, elegant, and extraordinarily well-crafted. Their exceptional timepieces are well-respected by collectors to this day.

How could one resist the powerful elegance of such a man's watch! This large, 18 size 23 ruby-jeweled hunter-case railroad pocketwatch by the venerable Hampden Watch Company exudes class the likes of which we haven't seen in 100 years. A gorgeous porcelain dial is highlighted by fancy Arabic numerals, an outer minutes "track" and marked "HAMPDEN WATCH COMPANY" in a florid script below the "12." An oversized sub-seconds bit is micro-graduated; long elegantly blued hands gesture the time.

The watch is housed in what we believe to be its original, solid yellow gold-filled, hand-carved case outlined with majestic flourishes impossible to find duplicated today. Pocket watch case carving flourished through the latter half of the 19th century and into the first quarter of the 20th. Artisans flocked to the United States from around the work, eager to find a venue by which to earn a living and through which they could express their creative urges. For many, the artistic medium of choice was the pocket watch case.

These talented, anonymous artists worked throughout the day, quietly creating works of art on watch case after watch case, painstakingly carving freehand with hand tools on a graving ball. Taken for granted for nearly a century, these creations are finally being given the credit they deserve, as more collectors seek out watches based solely on the quality of their case carving.

Take a moment to admire the work of this artist: Starting with a smooth, heavy gold-filled case, he or she used a set of sharp graving tools to carefully carve a floral scene on the back. Note the different "brush strokes" of the artist: bold lines to outline the petals, tight lines for shading a half-a human hair apart — all to create a Victorian floral scene that, if on canvas, would be worth thousands.

Open its back and inner cuvette and you'll reveal another work of art: a completely cleaned, oiled and calibrated 23 ruby jeweled movement in solid nickel plated, engineered by the remarkable minds of Hampden. With its fancy regulator, compensated balance and screw-jewel settings, it struck fear in the Swiss watchmakers of the day — most of whom were still locked in a bucolic cottage industry. During the latter part of the 19th century, if one wanted a precision timepiece that could be easily repaired and regulated, one purchased American. This example illuminates why. Please take a moment to admire the sheer excellence of this "Railway" marked movement.

We're pleased to offer this historic work of horological art with a heavy gold-filled watch chain and solid gold 25 year award fob given by the Order of Railroad Telegraphers. The very name of the organization sounds romantic, conjuring up images of talented, nimble-fingered railroad telegraph operators, sitting in their 19th century offices, tapping out fascinating messages up and down the rail lines!

If you're looking for a watch to carry and admire while being admired; or, you're searching for a gift to reflect the generosity of the giver, this may be for you. We are happy to offer this work of art in a custom-fitted presentation box.