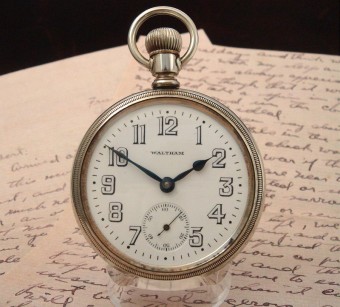 Among the American watch houses, the American Waltham Watch Company, or "Waltham," has one of the longest and most vivid histories. Founded in 1851 in Roxbury, Mass., the company supplied many of the watches carried during the Civil and Indian Wars of the 1870s, and along the Eastern Seaboard. They were the first to successfully manufacture watches using an assembly-line process and are credited with no less than igniting the Industrial Revolution. Their watches were widely copied throughout Switzerland and Europe and have come to symbolize a great American Horological tradition.

So much could be written about one of the greatest watch houses the world has known — American Waltham Watch Company — that one could spend a lifetime cloistered like a monk, scribing all its accomplishments. Founded in 1851, the company later known as simply "Waltham" helped formalize railroad timekeeping with its famous 18 size "Crescent Street" model — the first pocket watch in American manufactured and advertised expressly for the Railroad industry.

We have the great honor of offering what may be one of the finest examples available today of Waltham's legendary "Vanguard" pocket watch. This timepiece, which emerged from the hands of Waltham's watchmakers in 1904 has everything one could have hoped for in a railroad-grade watch of the day. Its PERFECT dial most unusual: In fact, while we’ve seen this military style configuration on WWI wristwatches, we’ve never offered a factory Waltham dial of this type. Highlighted by plum-blued spade hands and wonderfully stylized boxcar numerals it’s both breathtaking and unusual.

Within its railroad-grade swing-out silveroid case is none other than an original 23 ruby-jeweled Vanguard railroad movement with solid gold screw-jewel settings, solid gold train, compensated balance and micro star regulator.

The movement is as impressive as it was when it was assembled by Waltham artists and engineers more than a hundred years ago. We have, of course, taken the liberty of completely cleaning, oiling and calibrating this timepiece so that it keeps time as it was intended.

Overall, this is one of the most handsome railroad or early military pocket watches we’ve had the pleasure to offer— from its PERFECT rare dial to its pristine railroad-grade case to its scarce, ultra high-grade movement. If you're looking for that special watch to carry to impress your friends and co-workers; or, if you're looking for the gift of a lifetime, this stunning timepiece is it!