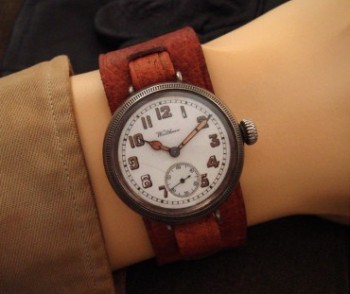 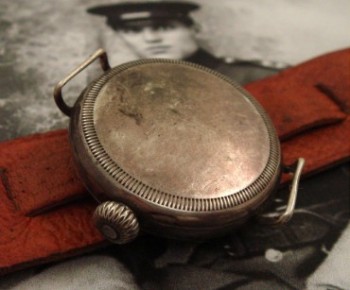 As hard as it is to believe, there was no men's wristwatch market prior to WWI. Wristwatches, or "wristlets" were primarily ladies novelties — small altered pocket watches worn on ribbon straps around the wrist or hooked to bracelet chains. While men's wristwatches were produced in very limited numbers for certain military applications as early as the turn of the century, men of the day considered these pieces to be effeminate and undesirable. World War I changed these views, as intensified warfare made fishing around in one's pocket for a watch a bit too time-consuming. Rumor has it that a German infantry officer took out his pocket watch, tied it to his wrist with a handkerchief, and thus the men's wristlet was born — not of fashion but of sheer necessity. While America was the leader in the world's watch production until WWII, some American companies, such as Hamilton and South Bend, didn't see the wisdom in chasing such a foolhardy fad.

Waltham, however, did participate in the war effort of WWI, thereby producing what have come to be known as some of the first men's wristwatches to be put into production. Considered by many to be superior to the majority of Swiss movements of the day, Waltham's 7 jewel gilt workhorse even has clear advantages over period Swiss movements: It's beefier and more resilient and has an overcoil hairspring: Swiss makers had flat hairspring that were a bit less resilient. With the Waltham's overcoil hairspring, force differential of the mainspring is maintained when fully wound and partially wound. With inferior designs, such equilibrium is not maintained and watches run faster when fully wound and slower as the mainspring winds down. This is called Isocronism.

This 1914 example of the Waltham sterling trench watch is quite exceptional, from its handsome "Waltham" marked dial to its factory "Dennison" marked oversized screw back-and-bezel reeded case. Measuring approximately 41mm by 36mm in diameter (!), this timepiece is a fine example of the birth of the modern wristwatch. Using its workhorse small pocket watch movement, Waltham commissioned Dennison along with Depollier to make watch screw back and bezel water-resistant cases with tabs or lugs soldered at either end so that the watch could be tied by a strap to the wrist. These "doughboy wristlets" became essential during WWI, and soon caught on around the world. Despite its rugged application, the watch was a triumph in Arts and Crafts simplicity, with deeply blued spade hands, porcelain dial and matching sub-seconds register.

Still extremely undervalued, these early sterling examples look stunning and are as appealing aesthetically as they are historically. We are proud to offer several variations of this watch and remain committed to being one of the world's leading dealers in such early vintage timepieces.

Please take a moment to regard our correctly re-created two-piece strap with matching buckle, faithfully rendered in our own shop. These straps have the look of the watches original strap but without the age, which allows one to wear his or her timepiece without worrying about a fragile museum strap. Only available from Strickland Vintage Watches and only on one of our timepieces, these straps are the perfect way to wear an early wire-lug work of wrist art!