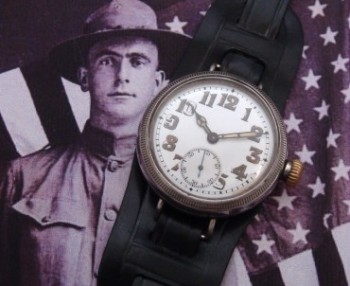 The famed maker Cyma was actually one of a group of companies under the umbrella of Tavannes, named after the Swiss village of Tavannes where the group was located. Early Cyma advertisements included "since 1862," implying Cyma had its start with the "Swob Freres."

By 1891 Cyma/Tavannes was producing 150 repeaters, grand complications and chronographs a day, using advanced machinery that would later earn the consortium status as the largest watchmaker in Switzerland. It was, however, during WWI, with Cyma's contribution to the war effort — in the form of new-fangled "wristlets" — that made the company a loved, familiar name among those who valued fine, dependable timepieces.

This early 20th century example of Cyma's craftsmanship is quite simply, a triumph. Measuring 35mm in diameter, not including crown, its smooth lines are classic and as attractive as it was more than 100 years ago. Stained glass hands highlight a beautiful ice-cream white porcelain dial featuring slightly oversized, "stylized" numerals. Its original, solid sterling silver Dennison screw-back case is fully hallmarked and quite handsome.

Open this back and you'll find an original solid gilt movement marked with an Cyma/Tavannes American patent date marked "U.S. PAT 24 May 1904". This is a reference to patent US 760647 for a negative set stem winding and setting mechanism granted to Henri Sandoz on that date, a US version of a Swiss patent CH 28243 granted to Sandoz in 1903. It's a game-changing innovation, as it allows for a smooth stem-setting versus a pin-set, whereby a pin must be pushed to set the watch.

We're privileged to offer this pristine work of horological history with a note of provenance from the son of the original owner, written in 2000. The note indicates the watch was given as a present to the father from his employers upon his return from WWI in 1918. In the poignant note, the son states, in part:

"It was given to me by my father after I had a long illness with rheumatic fever, around 1926, and retained by my mother and returned to me on my return from Egypt, World War II, 1945."

We've cleaned, oiled and calibrated this movement so that it keeps time as intended and installed a custom-fitted, correctly re-created cordovan strap and buckle of the type that would have been worn with the watch.

We believe this to be the fine combination and a trophy for your collection!

Here's your chance to own a wire-lug "wristlet" watch, the likes of which haven't been seen in nearly a century.