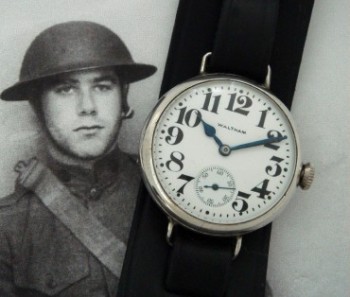 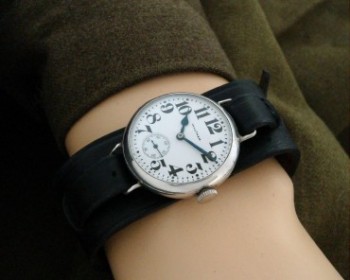 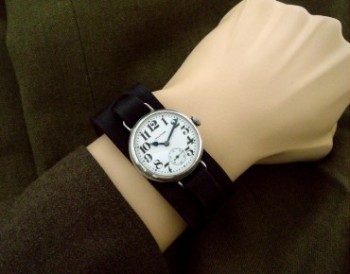 As hard as it is to believe, there was no men’s wristwatch market prior to WWI. Wristwatches, or “wristlets” were primarily ladies novelties — small altered pocket watches worn on ribbon straps around the wrist or hooked to bracelet chains. While men’s wristwatches were produced in very limited numbers for certain military applications as early as the turn of the century, men of the day considered these pieces to be effeminate and undesirable. World War I changed these views, as intensified warfare made fishing around in one’s pocket for a watch a bit too time-consuming. Rumor has it that a German infantry officer took out his pocket watch, tied it to his wrist with a handkerchief, and thus the men’s wristlet was born — not of fashion but of sheer necessity. While America was the leader in the world’s watch production until WWII, some American companies, such as Hamilton and South Bend, didn’t see the wisdom in chasing such a foolhardy fad. Waltham, however, did participate in the war effort of WWI, thereby producing what have come to be known as some of the first men’s wristwatches to be put into production.

This particular wire-lug example is appealing on so many levels: Aside from being among the first wristwatches made, thereby occupying a place in horological history; apart from it having a classic look that is certainly appealing; this watch is in good original condition, with WWI-era attribution.

What a solid sterling silver case! Marked "A.W.C. Co./Sterling” with flying logo, this hinged back model is near mint, with no damage, major dings or detractions. Open the back and you'll find its original 7 ruby jewel movement; professionally cleaned, oiled and calibrated to be worn daily.

We've even fitted the watch with a correct recreation of the black cordovan strap it likely would have been fitted with during WWI! This piece truly transcends time as a tangible link to a more heroic past.