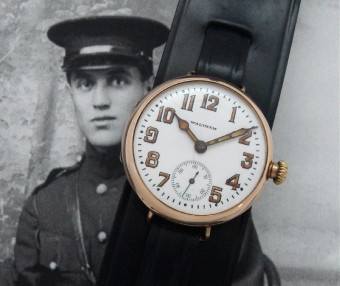 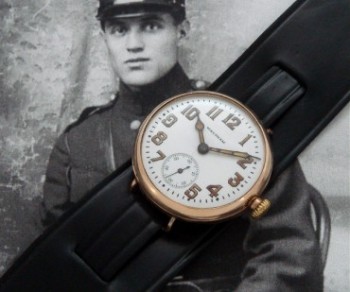 
Dimension: Approximately 32mm wide (not including crown) by 35mm from lug to lug

As hard as it is to believe, there was no men's wristwatch market prior to WWI. Wristwatches, or “wristlets” were primarily ladies novelties – small altered pocket watches worn on ribbon straps around the wrist or hooked to bracelet chains. While men’s wristwatches were produced in very limited numbers for certain military applications as early as the turn of the century, men of the day considered these pieces to be effeminate and undesirable. World War I changed these views, as intensified warfare made fishing around in one’s pocket for a watch a bit too time-consuming. Rumor has it that a German infantry officer took out his pocket watch, tied it to his wrist with a handkerchief, and thus the men's wristlet was born — not of fashion but of sheer necessity. While America was the leader in the world’s watch production until WWII, some American companies, such as Hamilton and South Bend, didn’t see the wisdom in chasing such a foolhardy fad. Waltham, however, did participate in the war effort of WWI, thereby producing what have come to be known as some of the first men’s wristwatches to be put into production.

In England, Dennison Case Company had become known as the watch case maker of choice. By 1916, their screw-back “waterproof” case had caught the eye of a fledging watch company called “Rolex.” They commissioned a version of such cases to be made for their new “Oyster” wristwatches (thus named because, like an oyster, they’re water-tight).

By 1920 the Great War was over, but the world's fascination with “wristlets” was not. This example, cased in solid 9k yellow gold by none other than the Dennison Watch Case Company, was in all probability presented to a cherished English soldier. The movement is Waltham, as Dennison had helped found the American Waltham Watch Company in the U.S., and retained a fondness for the company and its quality movements.

The metal dial has been meticulously restored to its original champagne color. A bar-and-dot outer minute register surrounds oversized, stylized Arabic numerals and a counter-sunk sub-seconds register. The “stained glass” hands are original and perfect. We’ve installed a new crystal that clearly displays the dial and is free from inclusions. The crown also is original.

The lid snaps open cleanly to reveal not only its hallmarks of Dennison Watch Case Company/9/[anchor]/U/.375/A.L.D.,” but a fine 1916 Waltham movement with a jeweled balance and solid nickel plates and fancy hand-etched damaskeening. We've taken the liberty of cleaning, oiling, and timing the watch so that it can be worn confidently. The watch will come with a custom-fitted, historically-correct black cordovan strap.

From its engraved, solid gold Dennison case to its outstanding Waltham dial and movement, this watch exudes both style and history.