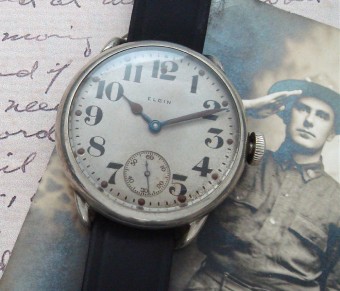 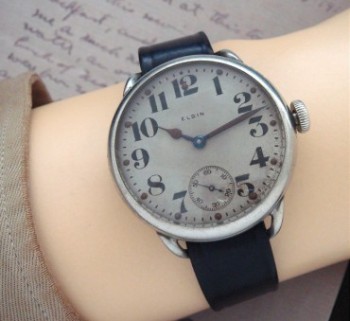 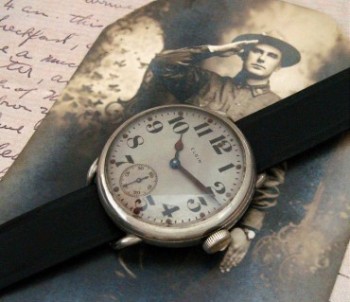 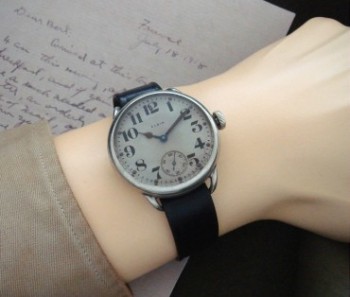 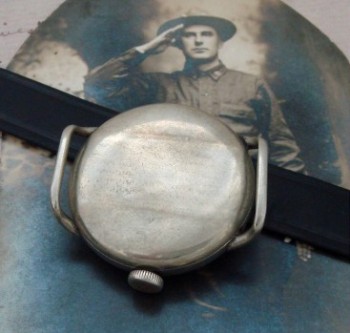 During WWI Elgin began devoting much energy toward manufacturing watches and timers for the U.S. military. Among their earliest, most forward-thinking examples was a special wrist model for the relatively unknown "U.S. Army Air Corps."

We at Strickland Vintage Watches, are happy to offer an exceedingly rare, completely original example of an oversized Elgin U.S. military-type wristwatch, circa 1918. This example, in silveroid, measures approx. 41mm lug-to-lug by approx. 38mm in diameter.

Its metal dial is original to the piece; foxed and slightly restored, as are its original blued spear-and-space hands.

The silveroid "Philadelphia" case is in remarkably good original condition, from its original crown to its distinctive, thick lugs.

Its un-engraved back opens to reveal its original 7 ruby jewel, gilt movement, which has been carefully cleaned, oiled and regulated.

We've taken the liberty of fitting this example with a correctly re-created cordovan strap of the type that would have been worn on this watch. This strap are not only historically accurate, it displays the watch well and is quite comfortable.

Please feel free to take a few moments and admire this historic work of horological art!