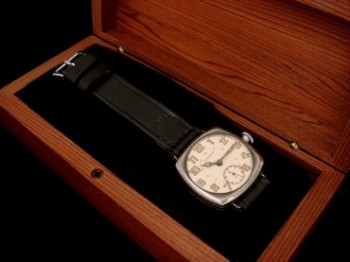 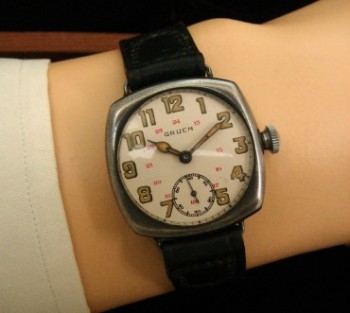 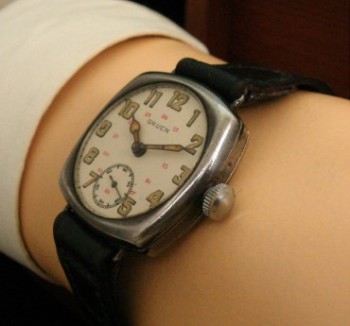 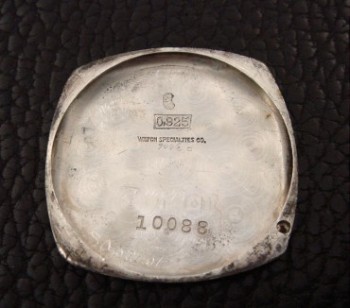 
Other Attributes:   Wire Lug
With Box

Gruen emerged as one of the pre-eminent watch houses in the United States, producing accurate timepieces in stylish cases that became Jazz-Age darlings. Watch houses sought to outdo one another, carrying the wristwatch as a fashion statement to ever higher levels, but none seemed to touch the panache of Gruen. Founded in the United States in 1876, the legacy of Deitrich Gruen is a benchmark for watch designers to this day.

This late Art Nouveau, early Deco men's Gruen timepiece certainly illustrates the adage "Out with the curves, in with the geometric lines." So was the philosophy of "L'Exposition des Arts Decoratifs," an international fair held in Paris in 1925, from which the term "Deco" was derived. Designs were less florid, more geometric, drawing on abstract and cubist influences.

It would be difficult to find a finer example of a classic vintage timepiece than this men's restored Gruen dress watch. Magnificently understated, with sleek early Deco design and superb engineering, this solid sterling silver timepiece should be worn only by those who are at "one" with style. We see this rare timepiece going to someone who can afford to wear fine things and will accept nothing less. Very Sunset Strip, Very "In the Loop."

This 36mm lug-to-lug by 32mm example is in fine restored condition, with its factory correct 15 jewel movement and case marked "Watch Specialties Co." – an early incarnation of Gruen – as its ticking heart and armor.

We've taken the liberty of completely cleaning, oiling and calibrating this time machine so that it runs and sets smoothly and accurately. Also, we've hand crafted and stitched a black cordovan strap to the watch, as would have been done a 100 years ago, and fitted the piece in a custom presentation case.

Want to put a twinkle in someone's eyes? Want to buy yourself something you can enjoy for a lifetime? You've found your watch!