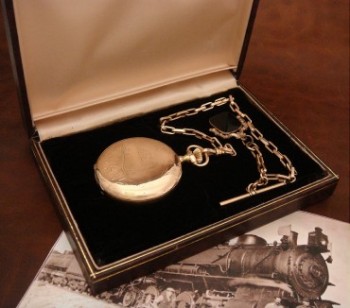 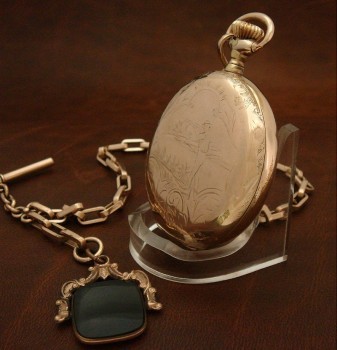 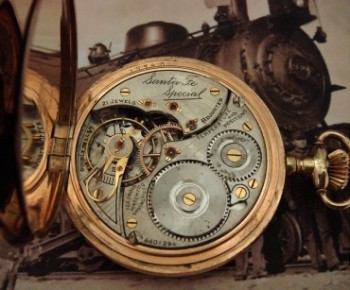 Known for their obsession with detail, Illinois produced watches that were exciting, elegant, and extraordinarily well-crafted. Today these watches are prized by collectors and designers for their look and reliability.

What is more romantic than the famed "Santa Fe" route? Winding its way through the deserts and canyons of the Old West, stopping in the city of its namesake at the fabulous Mission-style depot — it's the very best our country has to offer!

We invite you to take a moment to review the images of this watch, as it is a remarkable timepiece, indeed. From its quite handsome original dial with bold "boxcar" numerals to its highly jeweled, solid nickel, lever-set "Santa Fe Special" signed movement to its fancy yellow gold-filled hunter case, this piece is more than a pocket watch — it is a part of history. Look at the meticulous damaskeening on the "Santa Fe" signed engine — SO well done and without peer today. Offered with a heavy yellow gold filled watch chain and period fob, it is a work of horological art that can be used in your film production or carried much to the envy of your compadres.

We have taken the liberty of completely servicing this high-jeweled movement so that it keeps good, accurate time, so that you may "carry her" or display the watch on your desk or credenza.