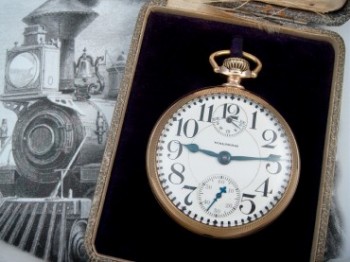 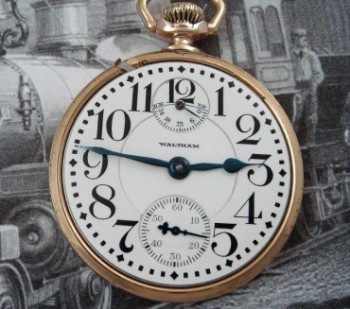 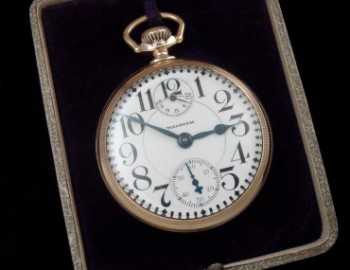 While Waltham's flair for engineering high-grade movements always seemed to be a bit ahead of the curve, they were not lacking in aesthetics. Waltham watches were not only mechanically artful, they were pleasant looking, even elegant. During the Art Deco movement, Waltham watches embraced all the ideals of Deco's European pageantry: sweeping lines, stark contrasts and heavily stylized numerals.

Waltham was also heavily relied-upon by faithful employees in the railroad industry. During the latter 19th and early 20th centuries, America's railroad was the system of arteries that nourished a burgeoning nation. The excitement and romance of working on the railroad lured many men away from "the farm" to ride the rails and see a young, vibrant country. Because thousands of trains used common tracks, accurate timekeeping was not only necessary to punctuality, it was essential in helping prevent rail disasters and collisions.

To be employed by the railroad, a man had to have a railroad approved pocket watch. Inspectors were hired with the sole task of examining watches to determine their quality and accuracy. Instructions were given that if an employee was found to have a sub-standard watch, he was to be summarily fired or, at the least, suspended until he produced a suitable timepiece.

These watches were "meal-tickets" and for many, far too expensive to purchase outright. If a man were lucky, he was allowed to purchase one of these expensive instruments on credit, making hefty payments each week until he could pay it off. One can only imagine how dear these high-grade railroad watches were during the depths of The Depression.

This 23 jewel Waltham Vanguard with exceedingly rare up-down indicator was one of the highest grade railroad pocket watches available. A wind indicator is an additional feature or complication primarily found on high-end railroad and military pocket watches. It is designed so the movement of the mainspring barrel causes the indicator hand to move as the watch winds down, indication how long it has been since the last wind. These watches were considered to be among the finest, most accurate timekeeping instruments of their day. Owners who relied upon them were expected to wind them only once a day, at the same time.

Cherished by conductors and inspectors alike for its resilience and accuracy, the Vanguard certainly lived up to its name. Twenty three separate jewels were installed throughout the watch to reduce friction and increase accuracy. A jeweler could regulate the movement by removing the back of the case and adjusting a tiny "whip" regulator on the balance. With its compensated balance, whip regulator, 23 jewels and double rollers, this watch would keep extraordinarily accurate time in all positions and extreme temperatures.

In addition to these remarkable details, this particular up-down model features a "Lossier Inner Terminal Hairspring," so marked on the polished winding wheel. Named after Louis Lossier, 19th century principal of the French Besançon School of Horology and author of “Etude Sur la Théorie du Réglage des Montres, the "Lossier Hairspring" was designed using Lossier's Rules, referring to the inner coil and pinning of the hairspring to further refine accuracy.

This was undoubtedly a railroader's most prized possession.

This example has its original dial with fancy Arabic numerals and "Waltham" in period print below the "12." Housed in what appears to be its original gold-filled railroad-approved case, this example remains in astonishing condition.

It is one of the most handsome examples we've had the pleasure to offer.

We have, of course, completely cleaned, oiled and calibrated this timepiece so that it keeps time as it was intended.
Looking for a magnificent gift? You’ve found it.