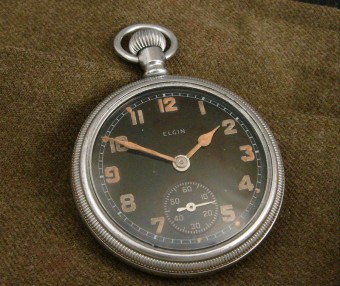 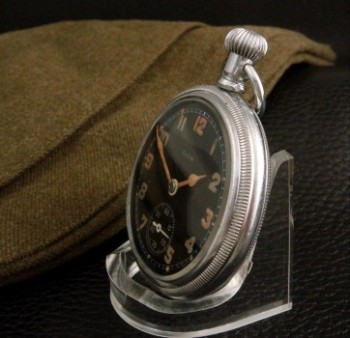 As the entire world devolved into conflict during the late '30s, American watch houses stepped in as they did in WWI and helped U.S. forces in any way they could. Eager to support the Allied war effort. Elgin National Watch Company diverted vast horological resources and expertise from civilian watch production to providing high-grade military timepieces for the Allies, including Canada and Russia.

Because wars are fought on "feet, stomachs and time," precision instruments in the forms of wrist and pocket watches were critical to successful military campaigns. Today these works of horological history represent one of the most exciting areas of vintage watch collecting.

While each watch was vital to the war effort and carried by a hero, there's something about a “broad arrow” marked watch, made for British troops and owned by the Crown that quickens the pulse.

The term “broad arrow” refers to the stylized arrowhead traditionally used in heraldry used by the British government to mark Her Majesty's government property.

Its origin dates to 1330 when the use of a "broad arrow" – consisting of a tang and two barbs meeting at a point – was carved to establish ownership of the property of King Edward III. Taken from his own coat of arms, the broad arrow indicated His Majesty's ownership and pride "in no uncertain terms."

The broad arrow symbol was clear and effective, used throughout realm by subsequent monarchs. For example, it was carved throughout forests in the Colonial America by the "Surveyor-General of His Majesty's Wood" to indicate ownership for shipbuilding toward His Majesty's fleet. It was carved, stamped or embossed on military cannon, muskets, kegs of gunpowder, and various accoutrement. Two hundred years later, during World Wars I and II, it was carved or stamped on the backs of British military wrist and pocket watches as symbols of pride and honor. Today, the heraldic broad arrow mark is still used throughout the British Empire to indicate Her Majesty's property and troops.

This wonderful work of horological history is no exception: a 16 size "broad arrow" pocket watch manufactured and cased by The Elgin National Watch Company for British military use during WWII. Considering what it might have gone through, it is in startlingly good condition, from its midnight-black dial highlighted by "stained-glass" hands and clear boxcar numerals to its chromed case and glass crystal. Unscrew the back of its famed 52mm broad arrow case and you'll find a hidden treasure in the form of a remarkably pristine Elgin National Watch Company mechanical movement, circa 1943.
We have taken the liberty of cleaning, oiling and calibrating this work of art so that it keeps time as intended so many years ago for some unnamed, unsung British hero.