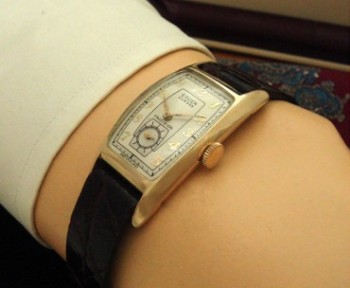 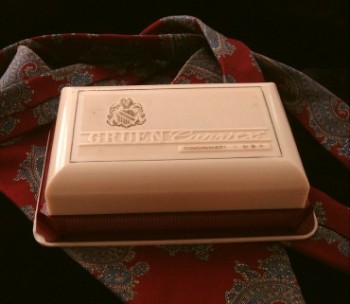 
Other Attributes:   Curvex
With Box

Gruen emerged as one of the preeminent watch houses in the United States, producing accurate timepieces in stylish cases that became Jazz-Age darlings. Watch houses sought to outdo one another, carrying the wristwatch as a fashion statement to ever higher levels, but none seemed to touch the panache of Gruen. Founded in the United States in 1876, the legacy of Deitrich Gruen is a benchmark for watch designers to this day.

We're particularly fond of Gruen watches, as much for their style as their meticulous engineering. You will find few watch houses today that take the pride Gruen did three-quarters of a century ago. The look of a vintage Gruen still quickens the pulse and nothing . . . nothing is as pleasant as a cleaned and timed example ticking away.

This sensuously Gruen certainly illustrates the early 20th century's obsession with sensual curves. One of the most elegant, artful designs to have graced a wrist, the fluidity of this Gruen Curvex is absolutely palatable.

Measuring a solid 40mm by 22mm, this Curvex – in solid 14k gold – features an expertly restored platinum-and-pearlscent tone dial with highly stylized gold numerals, a fancy sub-seconds register and graduated outer minutes track. Marked Gruen/Curvex/Precision/Switzerland," its astonishingly original face is protected by an equally original, flawless crystal. This work of wrist art was clearly designed to be worn by someone of means and good taste.

Also Marked "Gruen/14k," it snaps open to reveal its mechanical treasure: a professionally cleaned, oiled and calibrated 17 ruby-jeweled movement – the pride of a remarkable watch house!

We've taken the liberty of fitting this extraordinary timepiece with a genuine peanut crocodile strap, enabling it to be worn much to the consternation of fellow executives and admiration of all who surround you. Looking for a gift for that special person? Don't give that battery operated drivel one can find on any street corner on the planet: Give a piece of horological history that can be worn and deeply envied!