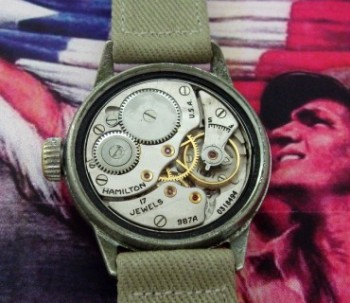 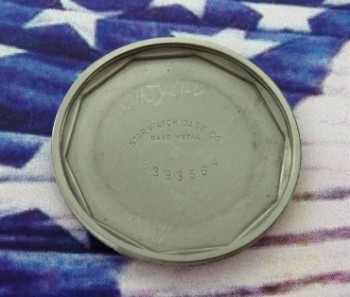 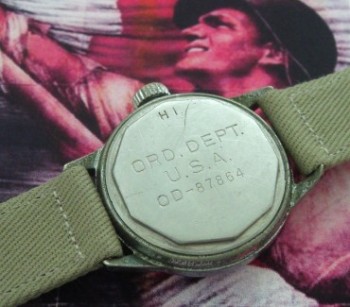 
Dimension: 31mm in diameter and 36mm from lug-to-lug

Today's military wristwatches are, in effect, disposable: their specifications state that they are made to be discarded when they stop running. However, 60 years ago, when WWII was raging, much more was expected from a timepiece. Resources weren't as available, technology was relatively simple and no one could afford to throw anything away. Watches had to be sturdy enough to stand up the grueling salt, heat and humidity of the Pacific Theater as well as the numbing cold of the European Campaign. American watch houses ceased civilian production during these years and devoted themselves to producing timing instruments for the war. Hamilton, then one of the largest watch manufacturer in the world, produced bomb timers and fuses, aircraft and tank watches, ship's chronometers, pocket and wrist watches. Of the timepieces carried in the field, theHamiltonordnance "field" wristwatch — worn in the field by real fighting men — seems to be one of the most romanticized and desirable WWII watches produced for the war effort. Specifications for the watch were very exclusive: they had to be screw-back and as waterproof as possible, have a sub second hand and be rugged enough to take the trenches.

A few watches made it back to the states, most of which having been well used during the War. We're delighted to offer this completely original Hamilton ordnance/sport timepiece, displaying all the character that a vintage military watch should. It has the aura of having seen action, with its correct, original military dial, stained glass hands and micro-graduated sub-seconds register.

Its case, which measures 31mm in diameter and 36mm from lug-to-lug, is correct, original and ordnance marked. We've left her just the way she came from the estate, aside from completely cleaning, oiling and calibrating it so that it keeps time as it did more than 70 years ago. Also, we've taken the liberty of fitting the watch with a correct re-creation of its original khaki strap. If rare and attractive are what you seek; if the perfect Town and Country/Boardroom/country club military/sport Hamilton timepiece is your grail, you've found it.