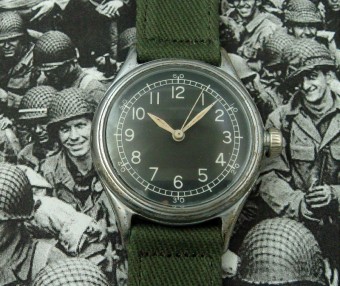 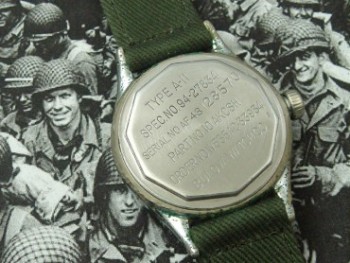 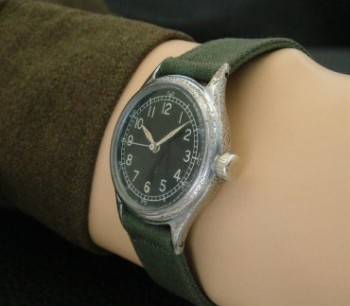 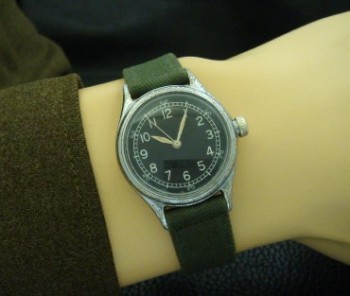 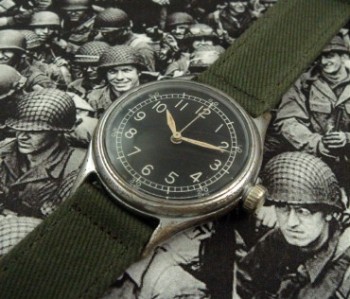 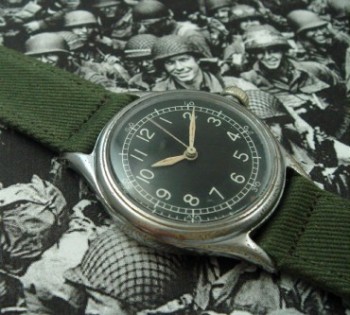 Today's military wristwatches are, in effect, disposable: their specifications state that they are made to be discarded when they stop running. However, 60 years ago, when WWII was raging, much more was expected from a timepiece. Resources weren't as available, technology was relatively simple and no one could afford to throw anything away. Watches had to be sturdy enough to stand up the grueling salt, heat and humidity of the Pacific Theater as well as the numbing cold of the European Campaign. American watch houses ceased civilian production during these years and devoted themselves to producing timing instruments for the war. Of the timepieces carried in the field, the A-11 wristwatch seems to be the most romanticized and desirable WWII watch produced. These timepieces were ordered to be used by Army Air Corps and Navy aviators, although many of them made their way onto the wrists of regular Army officers. Specifications for the watch were very exclusive: they had to be waterproof, have a center-sweep second hand as well as a "hack" feature, allowing the watch to be synchronized with a master time source for missions and bombing runs. By pulling out on the stem, the sweep second hand would be "hacked" or stopped; time could be set, then the stem pushed back in so the sweep could resume its motion.

The agreement with American watch houses was that they would support the war effort by supplying timepieces for ground troops and equipment; however, after the war all wristwatches had to be destroyed. American watch executives felt that if these watches were allowed back into the states, they would cripple business at a time when plants had not been able to produce and sell civilian watches for years. The United States government agreed and most of these faithful watches were unceremoniously crushed, buried, or dumped to prevent them from competing with civilian watch sales.

Of course, a few sentimental G.I.'s didn't have the heart to destroy something so dependable and utilitarian. A few watches made it back to the states, most of which having been well used during the war.

We're delighted to offer just such a piece of military history: a genuine, Mid-Century A-11 aviator's wristwatch sporting a jet-black dial, contrasting white numerals and hands - as well as that elusive aviator's "hack" feature! Measuring approximately 41mm long by 33mm in diameter, this strong specimen is in remarkably fine original condition, right down to its correct "Bulova" marked ordnance case. Completely cleaned, oiled and calibrated, it even is fitted with a correct recreation of the original ordnance-green canvas strap that would have been worn on the piece during its military use.