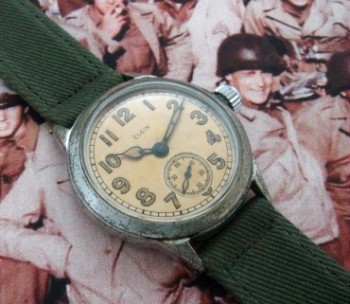 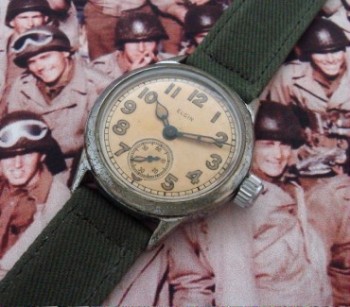 Today's military wristwatches are, in effect, disposable: their specifications state that they are made to be discarded when they stop running. However, almost 70 years ago, when WWII was raging, much more was expected from a timepiece. Resources weren't as available, technology was relatively simple and no one could afford to throw anything away. Watches had to be sturdy enough to stand up the grueling salt, heat and humidity of the Pacific Theater as well as the numbing cold of the European Campaign.

American watch houses ceased civilian production during these years and devoted themselves to producing timing instruments for the war. Elgin "pitched into" the war effort by producing bomb timers and fuses, aircraft and tank watches, ship's chronometers, pocket and wrist watches. Of the timepieces carried in the field during WWII, the ordnance wrist watch seems to be among the most desirable. These discreet heroes had to stand up to the extremes of war and provide soldiers with the ability to rendezvous at a certain place at the appropriate time, be it battlefield, bunker or beach. Many WWII soldiers had never owned a wristwatch before being issued one: When they received it, they relied upon it like their weapon.

While wristwatches such as this Elgin were heavily relied-upon during the war, relatively few made it back to the states.

The agreement with American watch houses was that they would support the war effort by supplying timepieces for ground troops and equipment. American watch manufacturers were more than willing to contribute to the war effort; however, there was a caveat: After the war all military wristwatches they produced were to be destroyed. American watch executives felt that if these watches were allowed back into the states it would cripple business at a time when plants had not been able to produce and sell civilian watches for years. The United States government agreed and most of these faithful time companions were unceremoniously crushed, buried, or dumped to prevent them from competing with civilian watch sales. Lucky for us all, a few made it back home, secreted in duffle bags or dopp kits by soldiers who simply couldn't bring themselves to part with the workhorse timepieces that helped bring them back safely.

Strickland Vintage Watches has become known for specializing in unusual and desirable timepieces — military wristwatches being among our favorite to offer. We're proud to offer original examples such as this Elgin when we can — cleaned, oiled, calibrated and ready to keep time for you just as they did almost 70 years ago.

We keep the watches as original as possible, leaving the cases as they came from the war. Most examples have their original "stained glass hands" and creme-colored dials. Most of the wear you see — scuffed chrome, nicks and bumps — occurred during WWII. From a G.I.'s wrist to yours.

We’ve cleaned, oiled and serviced this 38mm by 31mm Elgin and fitted it with one of our correctly recreated straps. It’s worthy of a Hollywood close-up and/or your wrist.