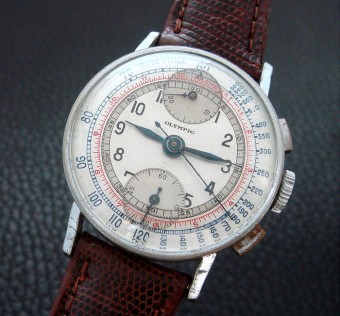 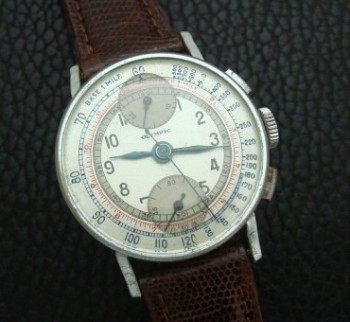 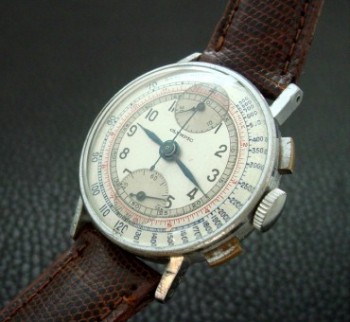 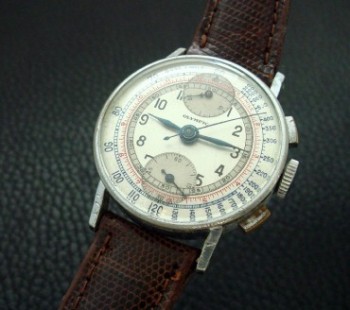 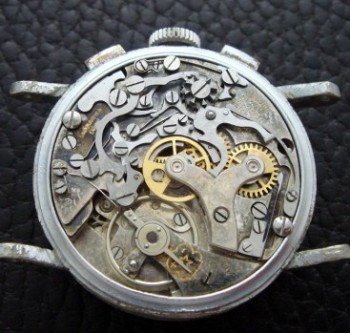 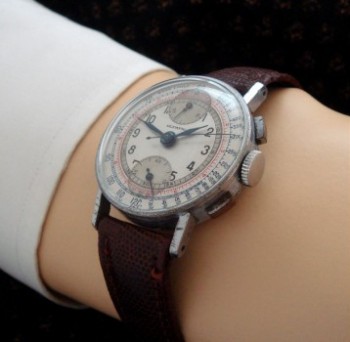 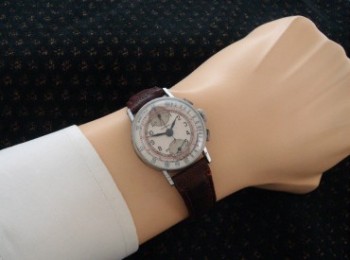 
Dimension: 38mm lug to lug by 31mm in diameter

While mechanical timekeeping began several centuries ago, a "Chrono-graph" or "time-writer" capable of measuring specific intervals of time was engineered in the relatively late year of 1822. This device, by the inventor Rieussec, "marked" time by making small dots of ink on a dial, allowing the observer to record the duration of a given event. Within a few decades, pocket watches were designed which allowed the operator to push a small button on the side of the case, starting a hand independent of the hour and minute hand: a second button stopped this hand. By 1862 Adolph introduced the first chronograph that allowed the timer hand to "fly-back" to a zero mark, providing a constant base line for measurements. By 1879, chronographs were operating in fractions of seconds.

Chronographs are considered "complicated" watches, as they are machined engineered to do more than tell time. Such mechanisms are a myriad of levers and gears, all perfectly machined and self-contained in cases often smaller than a quarter. Early 20th century military officers and aviators found chronographs to be indispensable for measuring distance and altitude, while racers and physicians used chronographs to measure elapsed time and the speed of a patient's pulse.

Today these complicated mechanisms, these wrist-sized "time-writers" constitute one of the most collectible areas of horology. Exceedingly rare; expensive when new, these remarkable machines helped mark our time as we rocketed into the modern world.

We're delighted to offer this early dual-register, two-button "Olympic" wrist chronograph in its original snap-back case. Manufactured around the WWII era, this timepiece, with its platinum-tone dial highlighted by split second and telemetry features, could have very easily seen military use.

Everything about this rare timepiece is in excellent original condition. Measuring 38mm lug to lug by 31mm in diameter, it has the sort of stance that one dreams of in an early wrist chronograph; that strong aviator look that draws attention and commands respect.

We've completely cleaned, oiled and calibrated this rare timepiece so that it keeps good, accurate time. We've also fitted it with a period lizard strap and matching stainless steel buckle.