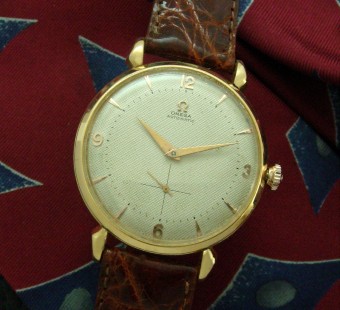 In 1848 23-year-old Louis Brandt opened a comptroir d’etablissage, a "sales office" through which he would sub-contract watch manufacture by the local Swiss cottage craftsmen. By 1880, having proven themselves as reliable purveyors, sons Louis-Paul and Cesar Brandt began a modern watch production unit in Bienne. It was at this level that they began manufacturing their own movements under the names Jura, Patria, Helvetia, Celtic, and Gurzelen. Within nine years of this move, Louis Brandt & Fils were the largest watch manufacturers in Switzerland, producing 100,000 units a day – well BEFORE wristwatches were mass-produced.

By 1894, in an effort to remain competitive with the American watch market, Louis Brandt & Fils began producing an "assembly line" pocket watch movement that was simple, reliable, accurate and had interchangeable parts. The company’s banker, Henri Rieckel, suggested they call their new product "Omega."

By 1917, the British Royal Flying Corps chose Omega watches to keep the official time for its combat units; later in the war, so did the Americans. By 1919, bolstered by years of creating war-time watches, Omega began taking victories at the observatory timing competitions at Neuchatel. In 1933, 1936, and 1946 — all war years — Omega took first prizes in chronometer competitions.

We are delighted to offer this 1950 men's oversized rose gold-tone Omega with gorgeous horned lugs! Measuring an astonishing 44mm lug-to-lug by 37mm in diameter excluding crown, this timepiece, with its original textured dial marked "Omega/Swiss Made," oversized sub-seconds register and elongated "spear" hands is everything one could hope for in a vintage timepiece!

Open the smooth, un-engraved case back and you'll find a cleaned, oiled and calibrated 17 ruby jewel 332 bumper automatic Omega movement. Wind this magnificent wrist-machine and it will keep good, accurate time for you as you argue that case, close that deal or raise your champagne glass to toast your fellow revelers!

We've taken the liberty of fitting this classic Omega with a new burgundy crocodile strap. For our dear overseas friends, we'll fit the piece in classic leather.