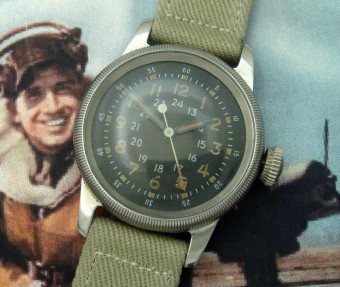 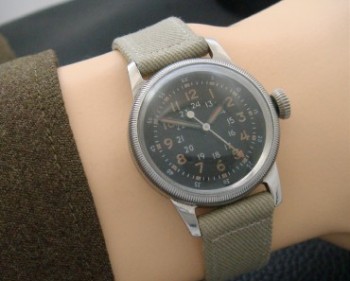 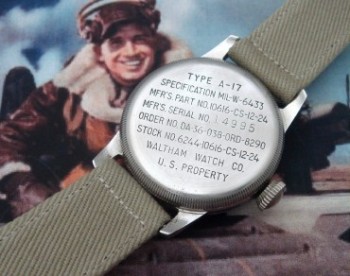 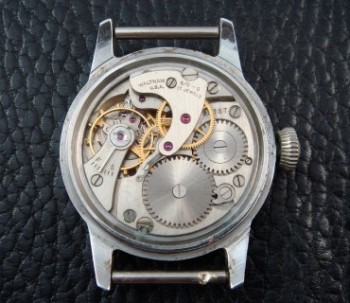 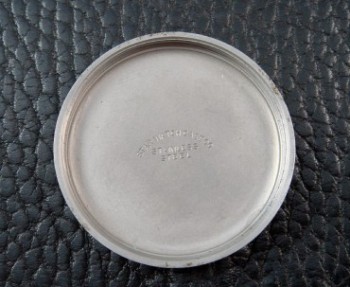 Today's military wristwatches are, in effect, disposable: their specifications state that they are made to be discarded when they stop running. However, 70 plus years ago, when WWII was raging, much more was expected from a timepiece. Resources weren't as available, technology was relatively simple and no one could afford to throw anything away. Watches had to be sturdy enough to stand up the grueling salt, heat and humidity of the Pacific Theater as well as the numbing cold of the European Campaign.

American watch houses ceased civilian production during these years and devoted themselves to producing timing instruments for the war. Waltham "pitched into" the war effort by producing bomb timers and fuses, aircraft and tank watches, ship's chronometers, pocket and wristwatches. Of the timepieces carried in the field, the A-17 wristwatch seems to be the most romanticized and desirable.

Ordered for Army Air Corps and Navy aviators, the watch had exclusive specifications: it had to be waterproof, have a center-sweep second hand as well as a "hack" feature, allowing the watch to be synchronized with a master time source for missions and bombing runs. By pulling out on the stem, the sweep second hand would be "hacked" or stopped; time could be set, then the stem pushed back in so the sweep could resume its motion.

A few watches made it back to the states, most of which having been well used during the war. This Korean-War era Waltham A-17 Aviator's wristwatch shows little signs of being worn; retaining a remarkably crisp black dial and contrasting white hands.

It measures 40mm lug-to-lug by 31mm in diameter and features a an original midnight black dial with white, oversized numerals and white hands - all crisp and correct. A completely correct bubble crystal is beautifully transparent, with no scratches or inclusions. The crown snaps nicely when pulled out; hack feature works perfectly, stopping the sweep second hand for synchronized timing.

The watch is fitted with a correctly recreated two-piece twill strap that is a perfect match to those worn during military service. This piece is in the same fine shape it was 70 years ago and waiting to be worn by a discerning collector such as yourself or your loved one.