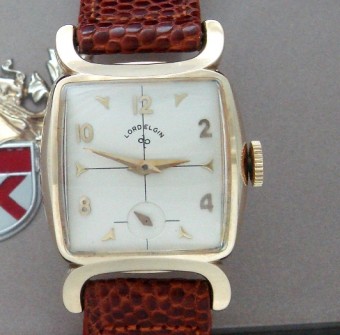 Elgin Watch Company was a grand endeavor from the moment it was conceived in 1864. Smoke from the Civil War had not yet cleared and businessmen were already being lured from Massachusetts' Waltham Watch Company to organize and build a monumental watch factory in Elgin, Illinois. By 1865 the company was organized and capitalized with half a million dollars, and unimaginable post-war sum. The company's leaders thrust themselves into the industrial revolution and were, in a few short years, running the biggest pocket watch company in the world. By the middle of the Twentieth Century they also dominated the wristwatch world, producing, among other popular models the "Lord and Lady Elgin" series distinguished by high-grade movements and progressive case designs.

We're delighted to offer the rarest of birds: a new-old-stock "Lord Elgin" classic that has been tucked away by a jeweler; hidden behind a drawer or put away in a safe and forgotten. It has emerged more than a half a century later: pristine, perfect and ready to be worn and admired by you!

The condition of this treasure can be summed up quite simply as perfect and unworn. Its breathtaking 37mm by 26mm yellow gold-filled case is deliciously Mid-Century, featuring a restored pearlescent dial marked "Lord Elgin" with gold applied stylized numerals, a matching sub-seconds register and familiar Elgin "Dura-Power" logo. Sensuous lugs are in the "Cadillac fins" configuration, adorning each corner of the case.

Open this amazing timepiece watch and you'll find a factory original, ruby-jeweled high-grade American-made manual-wind movement that has been completely cleaned, oiled and calibrated so that it keeps excellent time.

Equally pleasing is its original box and with tan velvet/satin lining – rounding out a presentation that is equal parts Rat Pack, "Breakfast at Tiffany's" and Fifth Avenue.