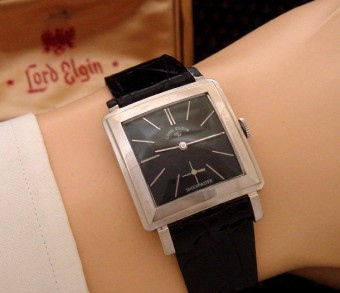 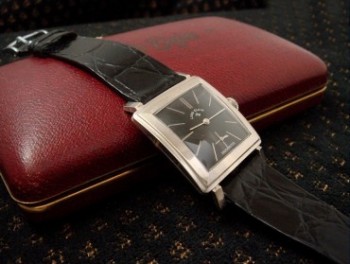 Elgin Watch Company was a grand endeavor from the moment it was conceived in 1864. Smoke from the Civil War had not yet cleared and businessmen were already being lured from Massachusetts' Waltham Watch Company to organize and build a monumental watch factory in Elgin, Ill. By 1865 the company was organized and capitalized with half a million dollars, and unimaginable post-war sum. The companies leaders thrust themselves into the industrial revolution and were, in a few short years, running the biggest pocket watch company in the world. By the middle of the Twentieth Century they also dominated the wristwatch world, producing, among other popular models the 'Lord and Lady Elgin" series distinguished by high-grade movements and unforgettable case designs.

It is difficult to imagine a more sophisticated design than this Mid-Fifties 21 ruby-jeweled Lord Elgin wristwatch in a rare, fluted white gold filled case. Sleek, stylish and expertly engineered, this was the watch every man aspired to during the Mid-Century movement. Considered one of the finest watches of the day, this Lord Elgin not only embodies elegance, it remains a fine example of Elgin's stylistic prowess.

Measuring the Golden Mean of 40mm by 30mm, this work of wrist art features a PERFECT black dial with stick markers and matching hands. Open its unengraved back and you'll find a completely cleaned, oiled and calibrated ULTRA high grade 21 ruby jeweled "713" Lord Elgin movement with compensated balance and regulator.

Whether you're looking for the perfect watch for your next leading man, or you're searching for JUST the right watch to woo the jury during your next big case, this watch is an excellent choice.