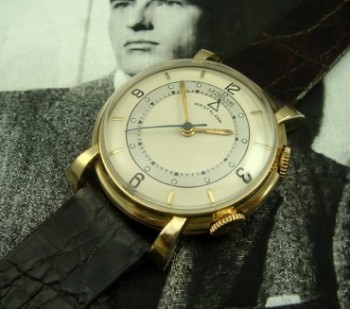 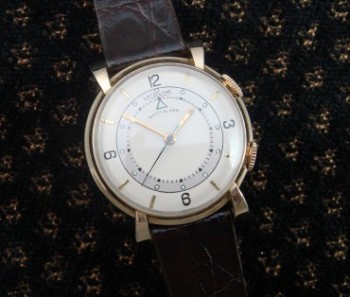 Around 1800, Henri David LeCoultre owned a forge and shop in Le Sentier that produced mechanical instruments. In 1803, he had a son, Antoine LeCoultre, who later apprenticed in his father’s shop, demonstrating a gift for metallurgy and gear-mechanisms. In 1833, son Antoine left the family workshops and founded a business manufacturing watch gearing with his brother Ulysse. Antoine had made a name for himself as a talented machinist and watch-maker. He invested his energy and engineering prowess in the development of new production processes and methods for making fine machinery and watches. His Millionometer of 1844 was the first instrument capable of measuring components to the nearest micron - a millionth of a meter. By 1860, Antoine LeCoultre’s shop employed 100 people. LeCoultre became an early source for complicated movements, creating repeaters, chronographs and calendars and, by 1899 had become the Vallée de Joux's leading manufacturer. In 1903, the House of LeCoultre entered into a business relationship in Paris with the chronometer-maker Edmond Jaeger. This partnership opened the way into the luxury market for LeCoultre and resulted in the name of Jaeger-LeCoultre, which was to become synonymous with high-grade watchmaking.

LeCoultre wrist alarms are quite desirable, known for their smooth curves, substantial cases and twin crowns.

We have taken the liberty of fitting this rare timepiece with a new brown alligator strap so it can be worn much to the envy of co-workers, friends and colleagues.