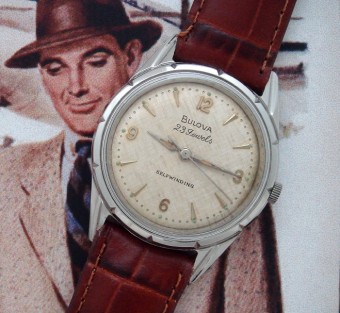 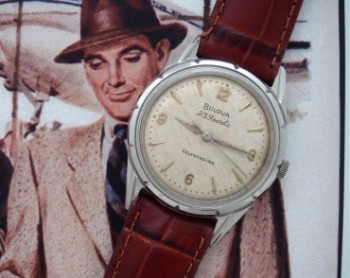 It's hard to believe that a watch company responsible for more than a 100 brand and model names, half a dozen trademarks and engineering that contributed to winning two world wars could have begun in a tiny jewelry store in New York.

Such is the case with the venerable Bulova Watch Company. Joseph Bulova emigrated to New York with his son and daughter, determined to make a better life for the three. In 1875, he began importing Swiss watches; soon, he was having cases made here in United States for its own line of watches. By 1911, Mr. Bulova opened a subsidiary of his American company in Bienne and by 1919 he was producing his own line of men's newfangled wristlet watches. It was not until 1924 that he began producing women's wristwatches; however, by the 1920s he had become a nationwide marketer of fine, stylish timepieces.

One question often asked about Bulova Watch Company: is it American or Swiss? The answer is – both.

While Bulova founded his company in United States, he also operated a satellite facility in Switzerland, one that provided much-needed high-grade movements for his specially designed cases. Mr. Bulova did not like the idea of depending on the Swiss and set about gathering machinery to produce high-grade ebauches in America. In 1929, to protect his company from the possible loss of Swiss movements, Joseph Bulova's son became chairman of the board and instructed the company to import an entire Swiss factory - piece by piece - to the United States so that they could begin making components here.

It took Bulova Watch Company 10 years to completely tool up so that it could manufacture a complete watch in the United States. By 1940, Bulova was producing an American-made timepiece: a year later, it was pressed into service by the US government to produce timepieces for the war effort.

Bulova never stopped importing Swiss components for their timepieces; instead, they functioned as a producer on two continents. Today, Bulova watch company stands as one of the most historically significant watch houses in the world.
This mint men's 1960 automatic in solid stainless steel is a clear example of the brilliance of Bulova: Measuring an impressive 42mm lug-to-lug and 34mm in diameter, it features a rare slotted bezel framed by beefy "Vegas" lugs and highlighted by an original linen dial in platinum finish. Fully and professionally cleaned, oiled and calibrated to keep time as intended, this watch has that "Steve McQueen" wrist appeal that is so sought-after today.

Not only does this timepiece have the look our clients crave, it is powered by no less than Bulova's famous "23 jewel self-winding" movement. Wound by the movement of the wrist, this timepiece keeps accurate time and never needs batteries!

Elegance, brilliant engineering and pristine condition – all high-points of this 1960 classic.