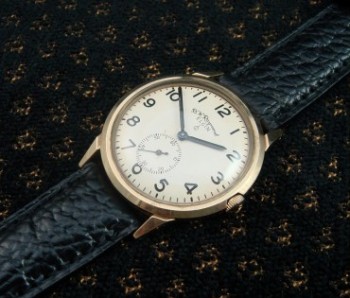 When we think of great vintage watches, we think classics that were lauded when produced, then elevated to legendary status as the extent of their quality revealed itself. A great vintage watch transcends the level of ordinary timepieces. It is a work of mechanical art, a triumph of engineering prowess that is also beautiful. It is this marriage between art and engineering that makes fine timepieces so alluring. It's why we're here.

Following a hallowed tradition of naming their highest grade movements after founders and investors, Elgin chose to honor Mr. Benjamin W. Raymond, the former mayor of Chicago, who put together the team of investors who founded Elgin National Watch Company. The name "B.W. Raymond" was bestowed on the very first movement built by the company, and was reserved for the company's ultra high-grade railroad grade pocket watches.

Later, combining the wrist stance we love in a fine watch — a crisp, Mid-Century look; oversized at 42mm lug to lug by 36mm in diameter, with design elements like black baton hands and clear Minimalist numerals — with spectacular engineering, Elgin continued to set the standard in watch design by creating one of the highest-grade wrist watches ever produced. Its name? B.W. Raymond, of course.

This Elgin triumph was so well received by an astonished public that it made history – by being the first wrist watch to be accepted and approved for railroad use. A 23 jewel manual wind "780" masterpiece had, among other attributes, a true hack feature, a futuristic "durabalance" assembly and an iron dial for complete magnetic shielding. Adjusted in six positions just like their pocket watch predecessors, B.W. Raymonds were calibrated at the factory on a special timing machine.

This example sports its original dial and is factory-cased in 10k yellow gold fill with a screw-back to insure water-resistance. We have, of course, taken the liberty of completely cleaning, oiling and calibrating this classic so that it keeps time as it was intended.

We're pleased to offer this example in its original factory presentation box.

If it is a true work of horological art you're seeking, you've found it.