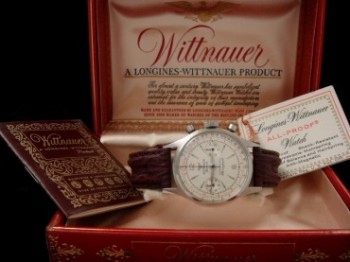 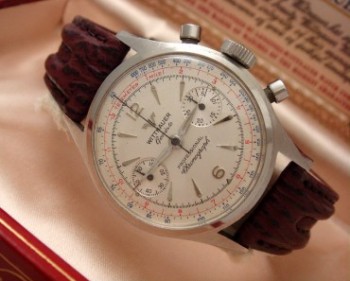 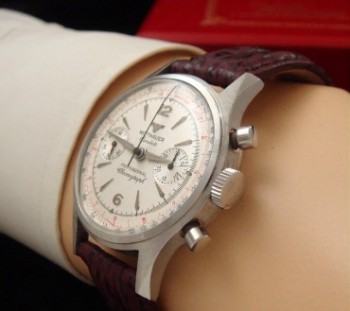 
Other Attributes:   Chronograph
With Box

Distinguished by a long history of representing important firms in the distribution of complicated and repeating timepieces as well as being inextricably linked to the house of Longines, Wittnauer is now being recognized as the prestigious watch house it is and has been. Founded in 1866, the firm went through several changes and endured many growth pangs before being called simply "A. Wittnauer" in the early part of the 20th century. Importing and representing watches from such well-known Houses as Audmars, Agassiz, LeCoultre-Piguet, Longines and Girard-Perregaux; they placed their name on some of the finest movements made. In fact, one of the reasons LeCoultre had later name recognition is, for years, most of their magnificent movements were supplied to Wittnauer.

In 1908 Wittnauer patented a gong for repeaters and in 1910 was a pioneer in the creation of the "wristlet" — or wristwatch — market. The firm also created the first aircraft clock for the US Air Corps and patented an automobile dashboard clock that was, for years, the standard of such timekeeping. In 1926, Wittnauer exhibited a collection of timepieces at the Philadelphia Sesquicentennial Exposition and was awarded the Grand Prize for beauty and workmanship. That same year, NBC chose Wittnauer to supply Longines watches for official radio broadcast timing. The phrase "A. Wittnauer Co., distributors of world famous Longines observatory watches presents the correct time" was used for years.

The style of Wittnauer is particularly distinctive and at one time one of the undiscovered treasures of the WWII era. During the early to Mid-century period, Wittnauer designers took advantage of the freedom of the era to produce watches and packaging with exceptional lines and presence.

This gorgeous two-register chronograph by Wittnauer has that romantic, beefy look that is so widely sought-after today. Sporting a magnificent, completely original dial with concentric telemetre tracks and split-second hand that flies back to zero, this timepiece exudes an overwhelming aura that simply cannot be felt in newer, less important timepieces. Its 45mm by 35mm solid stainless steel case is in completely original, as-found condition.

Of course we have taken the liberty of cleaning, oiling and calibrating the movement so that it keeps time as intended. Also, we've fitted the watch with a correct shark chronograph strap.

Offered in a factory Wittnauer red leather presentation box, this work of tactile art is all a man could hope for on his wrist.