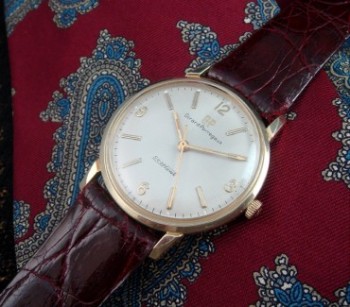 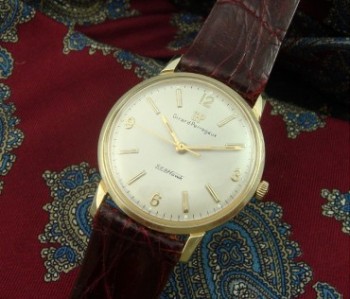 More than a century before Rolex became a twinkle in anyone's eye, assistants at Moulinier & Bautte – later to become Girard Perregaux, were sprinkling Eau de Cologne on the steps of their shop in Geneva to create a pleasant atmosphere for their aristocratic clients? Are you aware that while most serious watch dealers – ourselves included –
view the birth of the modern wristwatch to be in the trenches of WWI, that it was Girard Perregaux who delivered the first true wristwatches for men to the German Navy – in 1880 – to be worn on chains around the wrist? Winners of more awards for excellence and chronometer certificates than other watch houses would like for you to know, Girard Perregaux is, quite frankly, the most under-rated watch house in the world.

This Girard Perregaux wristwatch from the late '50s/early '60s is as good as it gets. Gorgeous dial and hands. Elegant case. PERFECT new-old stock crocodile strap. How much better could it get? In many cultures, watches are given in lieu of rings as wedding gifts - such crisp examples are particularly prized, as they are exceedingly rare.

This 39mm by 33mm beauty, crafted in yellow gold-fill has been completely cleaned, oiled and calibrated so that it is properly refreshed.

Looking for a handsome accent piece for your next movie? Searching for just the right gift for yourself or a cherished one? Perhaps you've discovered you share souls with the new Rat Pack and must display your penchant for Vegas-smooth. Whatever lead you here – this magnificent work of wrist art waits for you!