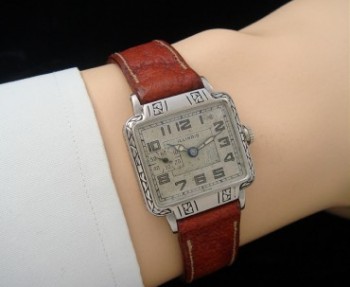 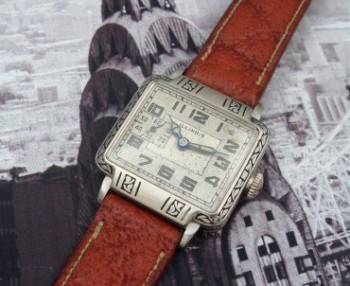 Illinois Watch Company, known for their obsessive attention to detail, produced watches that were exciting, elegant, and extraordinarily well-crafted. Today these watches are prized by collectors and designers for their look and reliability.

With a look that exemplifies the Deco movement, this exceedingly desirable men's white gold-filled "New Yorker" wristwatch has everything going for it: a great maker, superb condition, and extreme Deco styling. This model is as grand and mesmeric as its name implies. Considered one of the most attractive American Deco wristwatches, it features a mesmeric shape that well-suites the wrist; a stepped bezel and seconds bit at the "9 o'clock" position. Also featuring uncommon factory-original black enameling in a most handsome Aztec/Deco pattern, the watch is remarkably original condition.

In addition to a crisp case, this estate-fresh example has its original dial and factory enameling. It measures 34mm long by 28mm wide, it is easily recognizable and simply exquisite.

We've taken the liberty of completely cleaning, oiling and calibrating the original 17 ruby jewel movement so that it keeps time as it was intended. We've also fitted it with a period, N.O.S. boar strap and matching buckle that looks simply splendid on this work of wrist art! It is presented in a fine period Bakelite presentation box.

The panache of this "New Yorker" case design, combined with its condition, make it the timepiece one wears to create insurmountable envy among partners, co-workers and business associates.