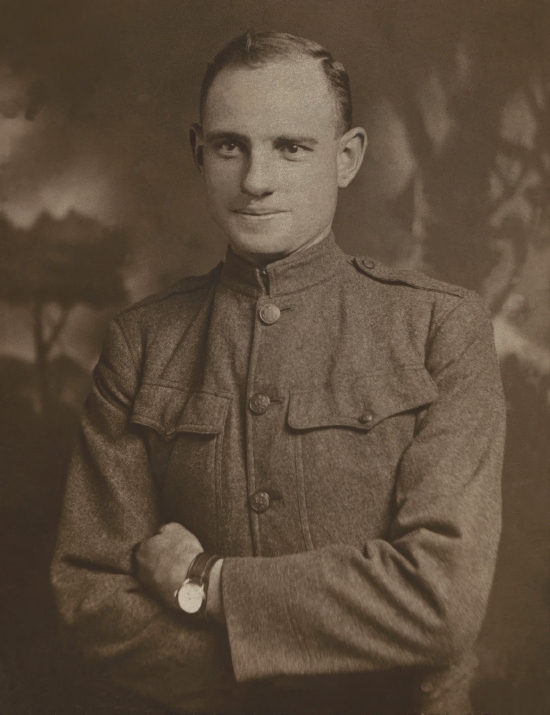 The WWI trench watch, its origins and characteristics

As hard as it is to believe, there was no market for men’s wristwatches prior to WWI. Men carried heavy, impressive pocket watches with fobs and chains not only to tell time, but to represent status and masculinity. Wrist watches, or “wristlets” were primarily ladies novelties — small altered pocket watches worn on ribbon straps around the wrist or hooked to bracelet chains.  However, as early as 1880, Girard Perregaux provided watches to the German Imperial Navy. These small pocket watches adapted to be worn on a chain around a sailor’s wrist constituted the first documented examples of a man’s wrist watch. Nevertheless, while men’s wrist watches were produced in very limited numbers for certain military applications as early as the turn of the century, men of the day considered watches worn on the wrist to be effeminate and undesirable. 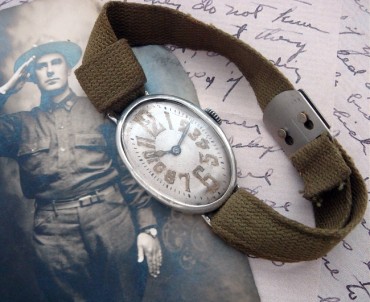 Shortly before WWI, a young man named Hans Wilsdorf, a successful London watch exporter, felt the world existed on a bland diet of pocket watches. He quit his lucrative position because, among other reasons, he had a hunch about a newfangled “wristlet” or wrist watch for men. Forming the partnership of Wilsdorf and Davis in 1905, he bet everything he had on the potential popularity of a man’s watch worn on the wrist. The company, which would become known as Rolex, SA, was founded, in large part, to create and popularize this vision of a high-grade man’s wristlet watch.

World War I confirmed the hunch of Wilsdorf and Davis, as intensified warfare seemed to make fishing around in one’s pocket for a watch a bit too time-consuming. Anecdote has it that a German infantry officer took out his pocket watch, tied it to his wrist with a handkerchief, and thus the men’s WWI trench “wristlet” was born — not out of fashion but of sheer necessity.

The Swiss quickly capitalized on this “soldier’s fad” by using it to create a new watch market in war-tornEurope. Watchmakers realized soldiers were doing what they couldn’t: removing the effeminate stigma of wearing a watch on the wrist. 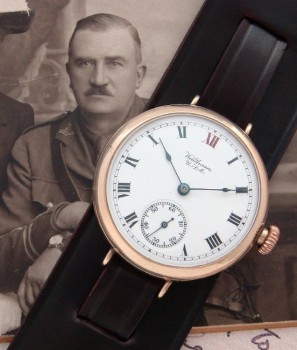 While America was the leader in the world’s watch production at the time, some American companies, such as Hamilton and South Bend, didn’t see the wisdom in chasing this foolhardy fad. These manufacturers believed that only women wore a watch on the wrist. Waltham and Elgin, however, did recognize the trends of WWI and participated in the war effort by producing America’s first watches marketed specifically for a man’s wrist.

Whether made in America or Switzerland, there are only two components to early WWI “trench” or wristlet watches: the mechanism and the strap. Mechanisms were simply small pocket watches held to the wrist by various means, usual leather, sometimes canvas.

The earliest examples of these were “0” size ladies pocket watches which held to the wrist in horsehide holsters. The upper piece was stitched with a brass ring insert, allowing the watch to be held firmly to the wrist, yet allowed access to the stem and crown for ease of setting and winding. These earliest models quickly gave way to watches with wire lugs soldered to two ends of an open-faced pocket watch case, through which a strap was threaded.

Later, straps were two-piece, consisting of a thick outer strap through which a thinner inner strap was woven. Often, men would remove the outer strap, preferring only the thin inner strap and watch on their wrist.

There also were two-piece straps, resembling those on contemporary watches, sewn to each lug. Buckles were sterling silver, usually hallmarked, of the same size and shape of those used on saddlebags. 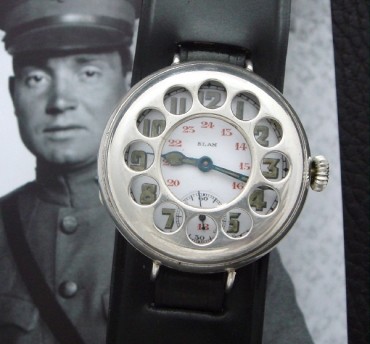 Strap material was horsehide or “cordovan,” pigskin or cowhide. On rare occasions, canvas or woven rope was used. During the war, strap material was easily obtained, as there was a tannery in most major towns. Today, tanneries are so scarce that proper leathers are nearly impossible to find. For example, high-grade cordovan, once ubiquitous, can only be obtained from two known sources in the world.

During WWI, wrist watches were rarely issued to soldiers. With few exceptions, if a soldier wanted a wrist watch, he either bought it himself or one was presented to him as a gift. There was no standard ordnance shape, form or fashion to such a timepiece; in fact, manufacturers experimented with various models, keeping design elements that worked, discarding those that didn’t. There were early watches that wound and set at the 12 o’clock position; others at the 3. There were examples with lugs at the “10” and “4,” orienting the watch at a 45 degree angle on the wrist for ease of viewing while flying or operating machinery. There were oversized watches with screw back and bezel, some as large as 50mm in diameter, for aviators and the Signal Corps. Other thick, cork-sealed models were used as water-resistant dive watches.

Another variation featured a “shrapnel guard” either integrated or as a separate component worn over the watch. These guards were meant not only to protect the mechanism but to prevent the wearer from being blinded by flying glass from a broken crystal. Hunter-case or flip-top examples incorporate a solid lid that springs open by the press of a button at the bottom of the case. More uncommon and among the most desirable, these flip-top models were typically worn by officers. 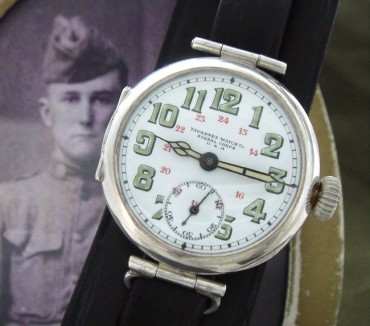 This experimentation continued until a generally agreed-upon ordnance style began to emerge toward the end of WWI, this being a 30-34mm example of silver, nickel or gold with wire lugs. These were seen as the proper sizes and considered standard models that would accommodate “0” or 3/0 size pocket watch movements. Manufacturers began to standardize tooling and measurements for such cases and corresponding movement sizes. These standardized measurements and sizes are used in the manufacture of today’s modern wrist watch.

For years, the early WWI era timepieces languished, as modern watches designed to withstand magnetic fields, water and shock took their place. Eventually, older straps could not be found to replace the rotting leather of early trench watch, and mechanisms were either cast aside or discarded. Today, early wrist watches are enjoying a resurgence in popularity, as collectors and re-enactors are discovering 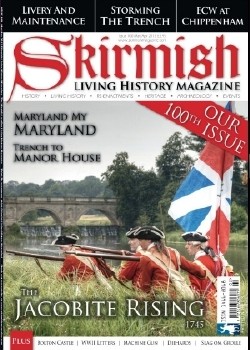 their beauty and historic value. Correctly recreated straps are now available, some made with horsehide, cordovan or pigskin. Wristlets that were once virtually worthless are being fully restored and fetching startling sums.

Collectors are drawn to these WWI trench watches for a variety of reasons: style, engineering, engraving or historic significance. No matter what the reason, these early wristlet watches are stunning and important works of horological history guaranteed to garner attention.

This article originally appeared in the March/April 2013 Skirmish Magazine by the UK’s Dragoon Publishing.